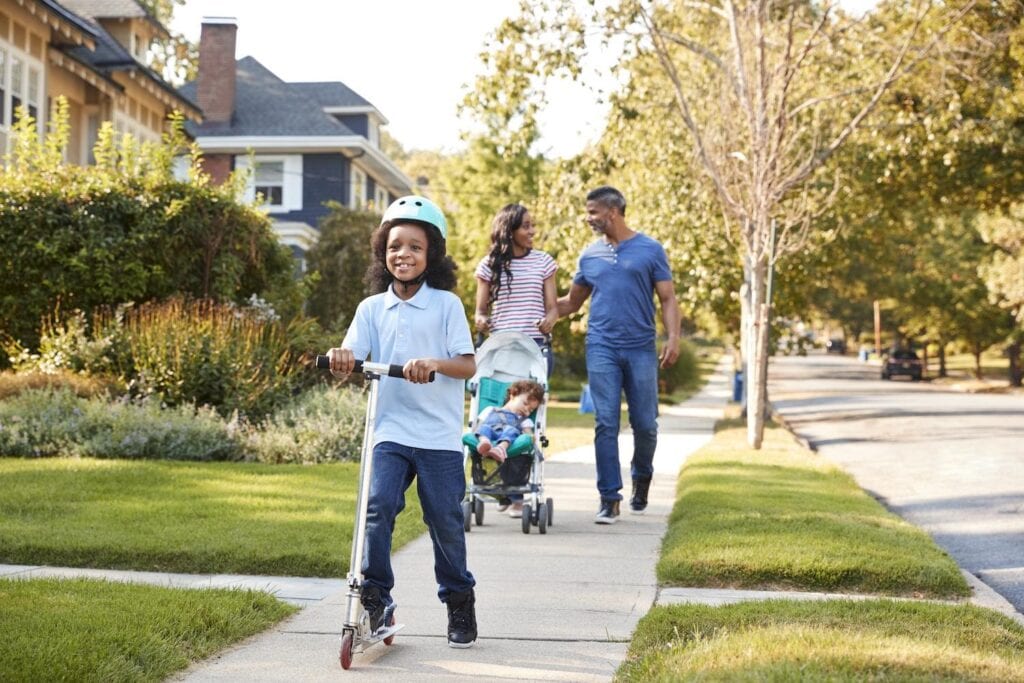 On any given day, a construction team somewhere in the country is pouring concrete. Concrete is an essential part of how our homes, neighborhoods, and schools are constructed. As construction and infrastructure projects ramp up, so does concrete consumption.

In 2020, concrete consumption reached 102 metric tons since the 2008 recession. Humans have been using concrete for millennia; the material can even be found as early as Ancient Egypt.

Because we work so closely with the construction industry, we know just how essential the material is. At LB & Sons, we are no strangers to the world of concrete. It is one of our essential services, as we often work with other contractors in pouring concrete for construction foundations, driveways, curbs, and sidewalks. And there’s another unnoticed feature of our everyday lives: the paths we use to take the dog for a walk, where our kids learn to ride their first bike, or where we go on our morning stroll.

The sidewalk is a part of every neighborhood but how did it begin? And how did it become a necessary part of our cities?

It Begins With Concrete

As early as 3000 BC, Egyptians used mud mixed with straw to create bricks. This very special material is a mixture of rocks, cement, and water. The early cement mixtures differed from today’s mixture and were composed of volcanic ash, lime, and seawater.

In ancient Rome, the many uses of cement were really put to the test. Ancient Romans used it as a fundamental building material that would form part of famous structures still standing today like the Coliseum in Rome. As modern methods developed for the production of cement, concrete mixing became an essential part of all construction.

The Sidewalk Leads the Way

Pedestrians weren’t as closely regarded in the early 19th century as there are today. There were no automatic crosswalks or countdowns. During this time, there were no footpaths and pedestrians simply walked along where the horse and buggies roamed in the far more rural setup of our cities.

In the early streets of Paris, pedestrians walked alongside horse carriages, wagons, and streetcars. At the same time, the streets were covered with the droppings of the horses. As such, walkways would be glossed over with not-so-pleasant slime. This forced Parisian pedestrians to walk quickly and develop a bit of a “skip” to their step in order to avoid splashing too much.

It may seem as if the first sidewalk was a modern invention but, according to some research, primitive walkways were developed as early as 2000 BCE in modern-day Turkey. The ancient Romans would also incorporate footpaths for pedestrians in their quickly-developing civilization.

After the Romans, sidewalks would spend some time in the dark, only to emerge again in 17th century Europe. In those early days, however, sidewalks were rare and quite the gem of any city. There were desired amenities that most localities could simply not afford.

In France, the medieval features of the time were torn out as soon as cities began implementing modern ideas and moving out of the dark era. Leading the way was Baron Haussmann, who played a heavy role in the redesign of the city of Paris.

Goodbye medieval-style infrastructure and hello modern apartment complexes, homes, and, of course, sidewalks that guided pedestrians along the modernized streets. Even in this early stage, the sidewalks were lined with trees, benches, and more.

Much of the impetus behind adding these pedestrian walkways was not so much focused on the enjoyability of a stroll out on the town but on the public health concerns of walking on horse droppings.

As the story goes, Haussmann—Paris’ early city planner—was fired not long after for lavish spending and increasing the Paris debt three-fold, but the ideas of these “breathable” cities that encouraged pedestrian movement on foot quickly spread across Europe and into the United States.

The Sidewalk Makes Headway in the United States

The turn of the 18th century in New England saw a lot of horse carriage traffic. It was not an uncommon occurrence to have people “drunk driving” their horse carriage recklessly through the streets of New York or New Jersey after leaving the public tavern and blurring the line between road and pathway.

For much of early history, horses, street musicians, vendors, and wanderers all mingled in the same general area with no discerned “street” and “sidewalk.” Jaywalking was a faraway concept!

As cities modernized and the Industrial Revolution set in, walkways became an important part of the city square. Later in the 20th century, when suburban neighborhoods left the inner cities and migrated to driving distances away from city centers and main city streets, the sidewalks went with them.

The sidewalks in many suburbs of today are the paths on which we take our dogs, kids, and families out to the local park. We don’t think much about them, but they play a big role in city planning and the way that new neighborhoods and cities are built.

Throughout the decades, sidewalks were used for so much more than walking and consequently have seen the banning of political and commercial speech, displays, loitering, panhandling, and even prostitution.

The Rules and Regulations Behind the Modern Sidewalk

The sidewalks of today are regulated and funded by various government entities including federal, state, or local city councils. A good, modern sidewalk comes with some very specific regulations. Sidewalks must be at least six feet wide, curb included. They should have a soft slope and allow for a line of sight to help with safety. When it comes to pedestrian crosswalks, they are to be painted with reflective paint and signs that attract the driver’s attention. Aside from that, a city has some freedom on how it wants to design and improve the design and functionality of its sidewalks.

We go beyond sidewalks. Here, at LB & Sons, we work hand-in-hand with the construction industry in helping with concrete pouring for a foundation, driveways, steps, and more.