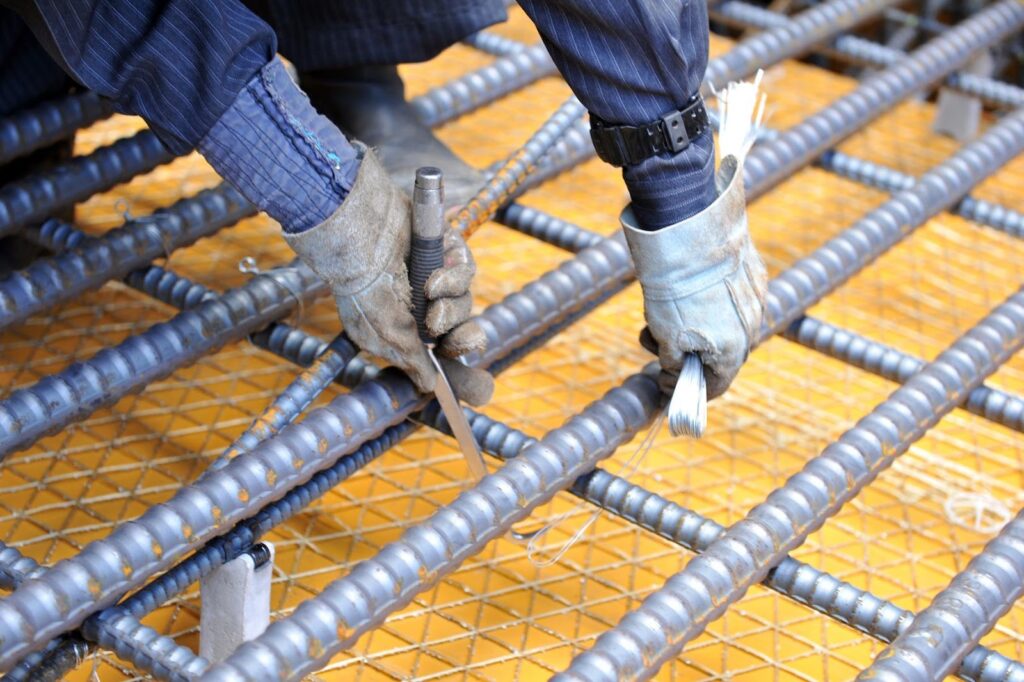 Have you ever seen a sailor tie a knot? They know a thing or two about it. Most take it very seriously. Some might even argue that it is an art. The proficiency in typing, however, is directly related to the bigger picture.

People don’t tie knots for the sake of tying knots. They serve a very specific purpose. We would say the same thing about tying rebar. Those outside of the construction industry might raise an eyebrow at this, but bear with us. Rebar is a necessary part of the construction and the act of tying is a laborious task that demands some crafty skills. We’ve been talking about digging quite a lot in our past posts, we thought we’d change it up a bit.

The Importance of Rebar in Construction

If you’ve ever driven past a construction site or toured any structure that is in the early stages of its building, you’ve likely been a witness to the inconspicuous presence of rebar. These long metal rods are often laid across a foundation creating a kind of grid beneath the structure or they are tied in bundles to support the concrete.

Rebar is not meant to attract attention. It does not seek recognition. It is the forgotten stepchild or construction site necessities. And yet, it is absolutely essential for a structure that has a sound foundation, stability, and integrity. Rebar is used for reinforcing, hence the name. It is usually used for strengthening foundations, walls, and other structures that require reinforced concrete.

A History of Rebar Tying

The tying of rebar refers to the various methods that a contractor can use to join the pieces of rebar together. The different rebar ties can vary depending on preference, where the joining point is, or the rigidity required. For vertical reinforcements, the installer may need stronger ties.

The history is unclear as to who was the first to use rebar for the reinforcement of concrete. Many a man has sought this prestigious title, but none has yet taken the honor. Some say that Francois Coignet, a respected industrialist, built the first home with reinforced concrete. Others claim that it was one Joseph Monier who used the technique in landscaping projects. The name Joseph Louis Lambot is also often credited. Others swear that it was Scrooge McDuck, who used it to build his famous coin pool. Ok, we made that last one up, but needless to say, it is likely that the technique sprouted up in several places, as advancements in the construction industry made rapid strides.

The use of rebar continued and methods varied in the early days. Some used iron to make the bars, others used steel. Experimentation with the shape, width, and girth of the bars ran its course. Different methods of joining the bars together were also tried out. And just like in Darwin’s theory of evolution, only the fittest survived. The best methods went on to become industry standard and the rest were forgotten, slowly withering away into the dustbins of history. Reinforced concrete would quickly become the method of choice and its technique would arrive in America and spread like wildfire.

The Different Types of Ties:

Just like sailor knots, there are different ways to join rebar. Lucky for us, they each have pretty snappy names, which makes talking about this that much more fun. Each of the different ties serves a purpose.

The Saddle Tie: This one takes a few more steps and it’s why it is the preferred method for certain projects. It is similar to a square knot instead of building a diagonal binding across the bar.

Wrap and Saddle: Consists of a one and a half loop around the steel. Adds security and rigidity, but is based on the saddle tie.

Snap Tie: This is the most common one, as it consists of a simple tie. One wrap around the joint, a few twists, a couple of turns, and voila! This is used for horizontal surfaces—such as the foundation of any structure that requires concrete. The rebar is then raised above the dirt with specialized cushions called chairs.

Wrap and Snap: The same concept as the snap with a little more wrap involved. Think wrap around both members, tied at one side, and snapped.  This is used to tie horizontal members that aids in the prevention of vertical supports from slipping down.

The tying of rebar is a strenuous part of the construction process. It is essential for roads, bridges, and many buildings. Rebar tying is often done manually or with more high-tech equipment, non-mechanical tools. Some of these tools allow people to tie up to 1,000 knots per hour, while only pushing down on a single button.

Here at LB& Sons, we offer rebar tying services. It may seem like a small detail in a giant construction project, but as any professional knows, the devil is in the details. If you skip them, they will come back and haunt you. Call a company that doesn’t cut corners and focuses on quality. Connect with us today and find out more about our services.