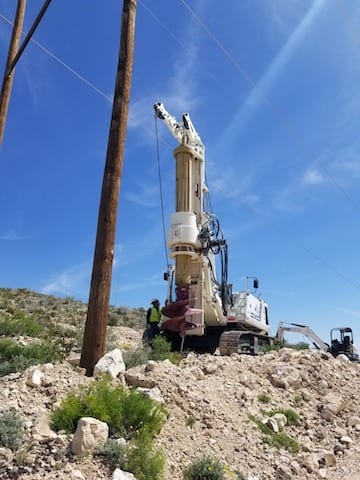 In our quest to build better structures, mankind has always searched for creative ways to better mold the land to our needs. From ancient civilizations to modern societies, new building techniques are always sought after. One common activity that is frequently performed in order to prepare land or open up land for the building includes rock drilling. Breaking rock is a common necessity for clearing land, building roads, tunnels, railroad tracks, and more.

Miners from the time of the Roman Empire often applied a “fire-setting” to break rock, then gunpowder was used during the Middle Ages. Rock drilling today is a heavy-duty job performed by heavy equipment and machines that penetrate the rock. This process is performed for many purposes including digging up a well, exploring for minerals from under the earth’s surface, and preparation for foundations. So we thought we’d take a look at the history of this process and why it’s so important today.

The Earliest Forms of Drilling

Early drilling was often achieved by hand. Think of it this way: one man turned the drill, the other turned the hammer. It was a rhythmic, laborious operation. In double jacking, one or two drillers hit drilling steel with large sled hammers. The holder would slightly turn the steel after each hit. Slowly, the hole was deepened and they would switch to longer steel when necessary. Of course, this method was quite burdensome and required quite a bit of patience and muscle. Therefore, the system was largely abandoned as soon as pneumatic drills were developed.

Breaking Rock and the Beginning of Drills

Breaking rock requires some technical knowledge and preparation. Planning the area and the hole in advance: knowing the length and width is key to ensuring the drilling goes well and that the rock breaks properly. Placing the drill properly will prevent inefficient drilling. Cable-tool was the first method used to drill a borehole. Manila hemp rope was commonly used in the early days of well digging. For some context, America’s first gas well was dug in 1821.

Drilling machinery over the years has also played a big role in the changes to all of the drilling industry. Drilling machinery equipment is used to drill holes for well sinking, petroleum, natural gas, water, and salt and scientific explorations. In 1849, a man by the name of J.J. Couch invented the first patented rock drill, which had the drill rod pass through a hollow piston and thrown like a lance against the rock. Not long after, a Denver machinist developed a hammering-type rock drill.

There are two main types of drills used today. These will typically include a rotary drill or percussive.

A rotary drill involves a cutting or grinding action.

A percussive drill chips rock or ground intermittently by the impact.

These two types of action drills serve different purposes. The typical rotary drill is the earth auger and is hand-operated. This, of course, is used to drill mostly in soft earth and not for hard rock surfaces. Essentially they work by cutting the rock in sections. They utilize three different types of drill bits: 1. Drag bits, which cut the rock 2. Roller bits, which use a crushing action to crush the rock 3. Diamond bits, grind away the rock.

The other type of drilling is percussive, and it tends to be slower than rotary drilling but has a number of special applications. In this type of drilling, there is a tool used and attached to rods or a cable. With each blow, the tool is rotated so that a new portion of the face is attacked at each blow. Some drills will use both rotary and percussive actions.

The Grenelle Well in France began in 1833 and was completed seven years later. It is at a depth of about 1,800 feet beneath the surface. This is one of the most famous Artesian wells. Its ticket to fame was due to the fact that it furnished water from so deep into the ground.

The first rotary drill was invented in 1845 by Englishman Robert Beart. Then it was around 1849 that the percussion drill came along. The drill was thrown against the rock like a lance at the forward stroke. Then it was caught and on the reverse stroke, thrown again. It was put to work on the Hoosac Tunnel project. The tunnel saw the passages of trains through the hills near North Adams, Massachusetts.

Then there was the steam-powered oil derrick. In 1860, J.C. Rathbone drilled a discovery well to 140 feet using a steam engine. Then was the invention of the diamond core drill. Innovations in rotary drilling technology allowed for almost continuous drilling. The diamond drill was given the first U.S patent around 1876 and the first electric drill was not around until 1889.

All of these developments would add up and develop the different methods of drilling that today form the majority of the drilling industry. Today’s equipment uses sophisticated machines that allow for heavy rock drilling to be done without much disruption.

Here at LB & Sons, we have been performing drilling operations since 1979. Our mission is to provide high quality and cost-effective services. We do this by ensuring that we are operating with the best machinery and better-trained staff. We offer commercial drilling services that allow us to dig into hard rock. We use cluster drilling and innovative rock drilling solutions. If you need to get through some stubborn rock, call the drilling professionals today.